Shawn Michaels was one of the biggest names in professional wrestling in the ’90s, earning the nicknames Heartbreak Kid, The Showstopper, and Mr. WrestleMania. But some fans also started calling him “gay” around 1996, and Michaels’ responses speak volumes.

Of course, gay was an unfortunately common insult in the ’90s, especially in hyper-masculine (yet undeniably homoerotic) spaces like the WWE. So why did Michaels, specifically, get targeted with the immature heckle?

All signs point to Playgirl.

Specifically, the October 1996 issue featuring Michaels in a towel and a come-hither look on its cover: 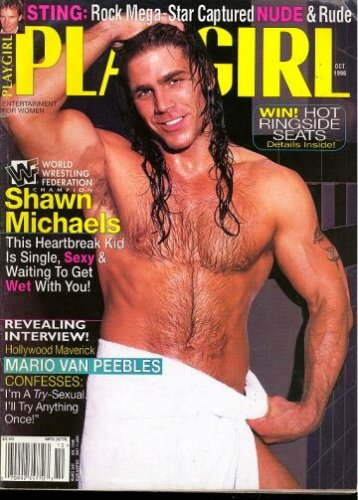 The star’s willingness to show his softer side in a magazine that many understood appealed to gay men along with straight women was enough for wrestling fans to start chanting “Shawn is gay!” at various WWE events.

But Michaels was having absolutely none of their homophobia, and it turned him into something of an icon for gay fans.

In this clip from 1997 that’s recently resurfaced, Michaels meets a group of hecklers at their level.

Responding to the “Shawn is gay” chants, he fired back: “Why don’t you ask your sister and your mama how gay Shawn is? Yeah!”

Okay, so maybe it’s not the most progressive response, but it was the ’90s and it absolutely succeeded in shutting the hecklers down.

Michaels got to practice his craft, though, and we much prefer this clip in which he claps back at the homophobes with, “Don’t knock the gay lifestyle unless you’ve tried it!”

Again… is it the perfect response? These days most people know to avoid terms like “the gay lifestyle,” but he was definitely improving.

Michaels was forced to step away from the ring in 1998 following a back injury, though he’s since wrestled again. He’s also remained involved with the WWE as a coach and a producer, and is currently Vice President of Talent Development Creative.

And along the way, he’s become an even better ally.

He basically shrugged off the media attention, saying it was a “big deal” for Young but that it shouldn’t be for everyone else.